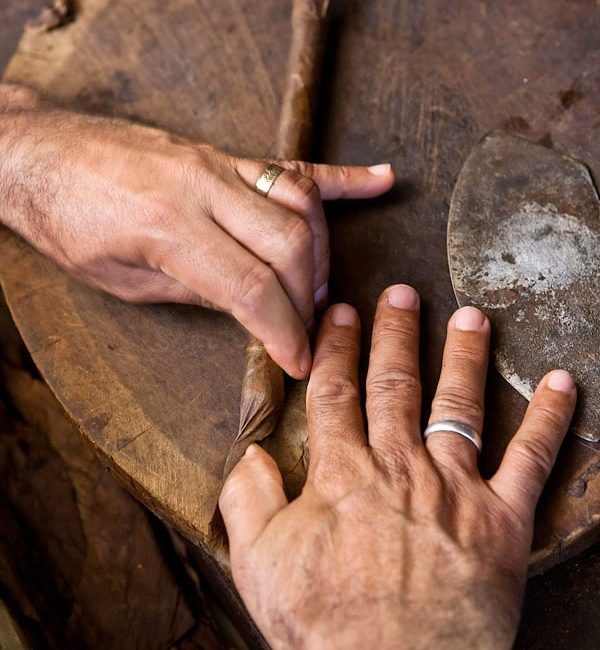 The Dominican Republic is a country devoted to the cultivation of tobacco and has
developed an agro-industrial process of the leaves that results in the production of large quantities of cigars which are exported to various parts of the world.

The entire tobacco manufacturing process affects its final quality, from the selection of the soil for planting, to the expertise of the artisan. Tobacco must be well planted, cultivated
and harvested, well dried, properly stored, well fermented and aged.

Tobacco is part of the botanical species Nicotiana tabacum, of the solanacea family. The
most primitive crops were found in South America, specifically in Brazil, Colombia, El Salvador, and Peru. It is formed by 24 pairs of chromosomes. Scientists affirm that tobacco is a natural hybrid originating from two species of the same genre: N. tormentosiformis and N. sylvestris. Each one of these species has 12 pairs of chromosomes. The hybrid born of these two species would be sterile if it had not produced duplication of its chromosomes as a way of generating a viable species, which occurred in a spontaneous way in nature.

Tobacco is native to tropical and subtropical regions therefore its natural environment is warm and humid, although it has been proven that it can grow and develop in countries of high temperatures. The best tobacco producing areas are between 45 degrees north latitude and 30 degrees south latitude. It vegetates easily and without difficulties in optimal conditions from 400 to 800 m above sea level. The best temperatures to grow tobacco must range between 18 and 28 degrees Celsius, although it can stand high temperatures, such as in warm valleys, as long as the hygroscopic degree is high (about 80% relative humidity).

Humidity control is essential, since tobacco is very sensitive to excess or lack of humidity. According to the experts, a deficit of water is preferable to an excess of it, because it spreads diseases. Dry air and lack of humidity result in desiccation of the leaves, making irrigation necessary when pluviometry is below 500 millimeters during the growing season, because tobacco is susceptible to temperature changes. Another important factor is control of excess sun light or shade. If the plants are excessively exposed to the sun chemical variations occur in the leaves.  On the contrary, if there is little or no light, the nicotine content of the leaves is reduced. All of these prove that tobacco is very sensitive to influences from the environment. Therefore, in order to obtain high quality tobacco, optimum warmth, enough humidity, and moderate light in intensity and time are required.

Depending on the color the leaves have after being cured and fermented, the tobacco will be considered light or dark. They are also classified according to the size and texture of the leaves.

Some varieties and types existing in the country are formed by mixtures, hybrids, and crossings which have given origin to varieties and types to a certain extent indefinite. This wide variety hinders uniformity and commercialization of local tobacco. Dominican tobacco industry tradition has adopted a simple classification for commercialization, dividing tobacco variety in two large groups: Olor Tobacco and Criollo Tobacco. The first corresponds to tobacco that, regardless of the variety, is used for cigar wrapper, binder and fillers. The second group is black tobacco, which regardless of the variety, is used to manufacture cigarettes and machine made.

New membership are not allowed.